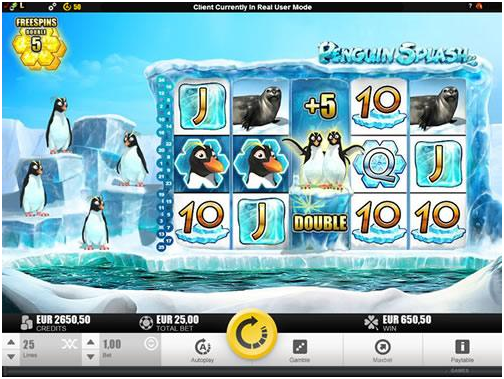 Penguin Splash is created by Rabcat and it has been available on Microgaming Quickfire software platform since October 2013. The theme is of Antarctica with harsh winters  and the penguins.

It is the five reel twenty-five payline game and awards some pretty impressive wins in both the main game and Free Spins round to keep the players happy at all times. You will only need two matching icons on a payline for an instant credit win, although high symbols pay when three or more are found on any line. It is important to note that all values shown in the Paytable are depicted in cash rather than coins, and these obviously change as you increase your coin size. A Fish acts as Wild here, replacing any other game symbol with the exception of Scatter to complete a winning combination where possible.

The Betting option can be used after each winning spin of the reels. Select between 1 and 25 paylines, while coin value ranges from $0.01 to $2 per line or up to $50 per spin. By clicking on Autoplay, you can trigger Fast gameplay as well. Most regular symbols offer pretty standard payouts during the main game, with these ranging up to 1,000 credits, but the dolphin icon stands head and shoulders above the rest. It is likely to prove one of the highest-paying symbols you have ever come across, with 20,000 coins or up to $40,000 awarded when five of these appear on any active line.

The game utilises high cards as low-value symbols, the dolphin, polar bear, fur seal and walrus represent the high-value symbols, with fish and penguin the two feature icons. The game may only have one bonus round, but it should prove quite impressive in terms of potential winnings. Three or more Penguin Scatters positioned anywhere on the reels activate the Free Spin round. Players are in turn awarded up to 25 free games, where all wins will be doubled if two penguins climb onto the ice floe.

With the 20,000 maximum coin jackpot bonus round you will love this game even more.