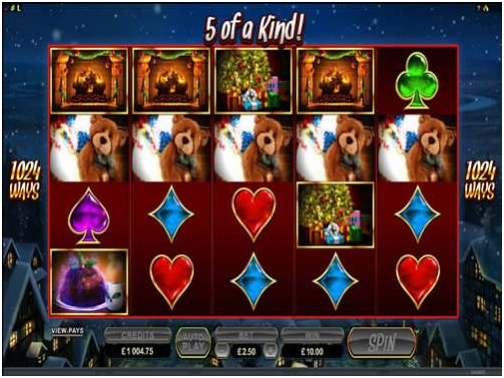 The Secret Santa online pokies game uses a 4×5 symbol layout which gives you 1024 ways to win on every spin. Jackpots on Secret Santa go as high as 2,300,000 credits which is far bigger than any random gift you’re going to pull out of a bag.

Minimum bet on Secret Santa is 50 cents per spin which covers all 1024 ways. You can bet up to 10 credits per way and have the option of credit sizes between 1x and 5c. Maximum possible bet is $25 per spin.

The Secret Santa symbol is wild for all symbols except the scattered Crackers. Getting five wilds on a way pays up to 8,000 credits depending on how many credits per way you play.

The 5 of a Kind AGAIN feature is triggered every time you get a five of a kind of the same symbol without a wild as part of the win. The symbols then re-spin and you get another five of a kind win. The feature does not activate with five wilds or five Crackers.

The Christmas Cracker symbols are scatters and can pay up to 50,000 credits if you’re playing max bet. At any time during regular play the Mystery Bonus can be awarded. Once triggered you win one of seven features.

The fact that you never know which feature you’re going to win is like a mystery for players of this pokies game.