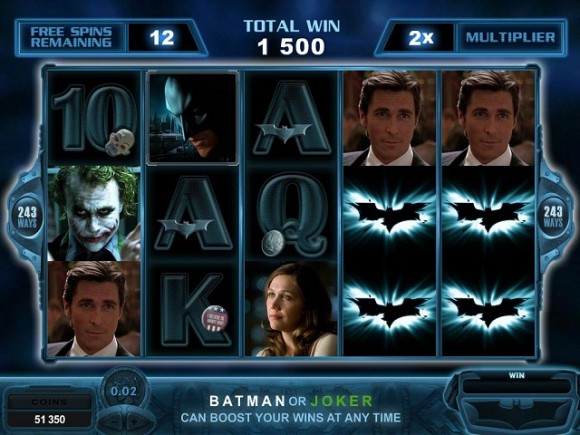 The Dark Knight is a five reels poker machine with 243 pay-lines and a jackpot offered at Microgaming online casinos. 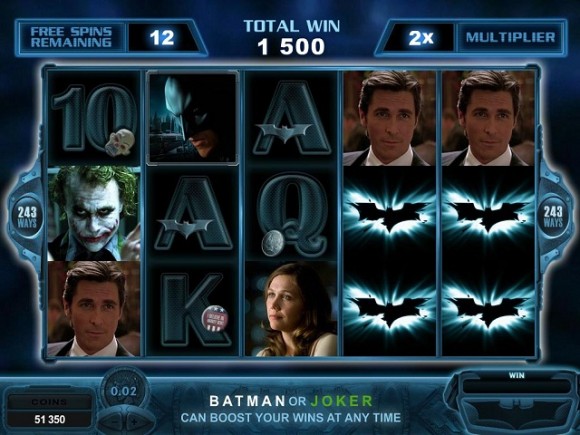 The Dark Knight pokies is one of the most popular pokies game from Microgaming. In this pokies you can look out for Batman and the Joker who give out random rewards such as cash, wilds and wild reels. There’s also a great Free Spins feature where Batman & The Joker can increase free spins and/or the multiplier to boost your winnings.

The Dark Knight is a Progressive Pokies 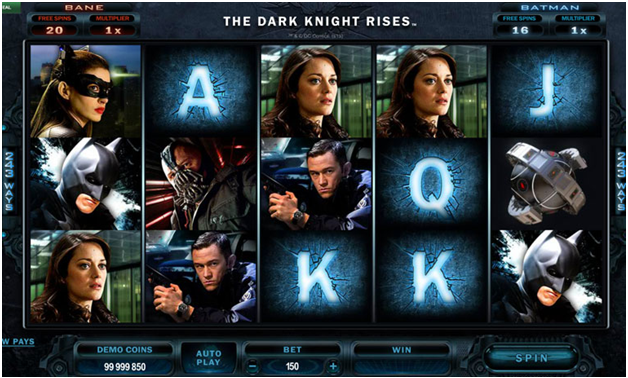 The Dark Knight is a progressive jackpot pokies game with 5 reels and 243 ways to win. This pokies is based on the 2008 film (The Dark Knight) which was a huge success.  This Batman-themed pokies is sure to excite you as it has a whole host of features. You can play for as little as 30p a spin to $6 a spin with a top payout of 4 million coins on offer. The game uses Cinematic Spins which means you will see clips from the film – these appear when you have a winning combination. 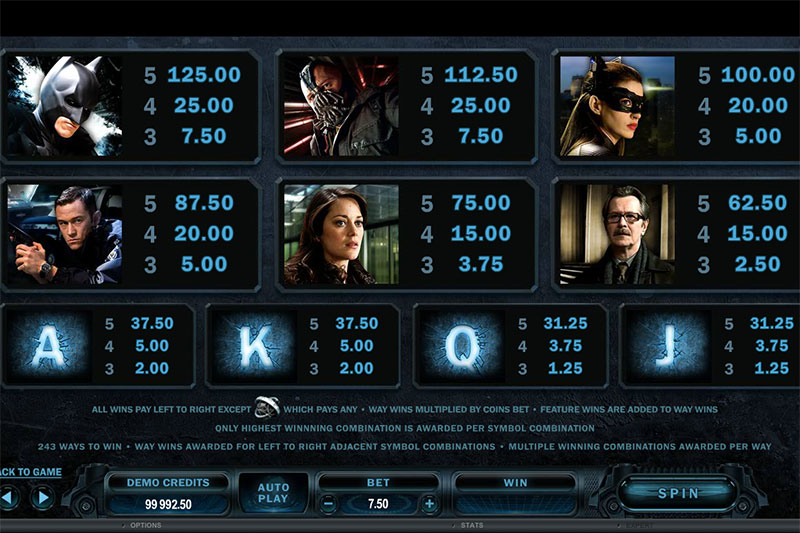 In the base game, look out for Batman and The Joker as they appear randomly. They can reward you with cash prizes, extra wild symbols and even wild reels. The symbol to look out for in the base game is the Joker scatter symbol as 2 of these anywhere on the reels will trigger the Free Spins feature.

You will automatically receive 15 free spins with a 2x multiplier. Batman and The Joker play their part (randomly of course) and can reward you with extra free spins and/or a multiplier increase (up to 5x). Getting a 5x multiplier on the free spins can really increase your winning potential.

Last but not least are the 4 progressive jackpots. Like other features in the game, entry to win one of them is triggered randomly. The Mega Progressive Jackpot, the biggest of the 4, will be a guaranteed minimum of 1 million coins. When you are in then you need to choose Batman or The Joker (choosing your side) and then spin the jackpot wheel. The bigger your stake, the higher the chances of triggering a jackpot.

The Dark Knight is a great looking game with the random rewards being quite good. The Free Spins feature is the best thing about the game as the bigger wins come from here. However, hitting the progressive jackpot is unlikely but one can only dream! The Dark Knight is not available to play for free though due to it being a progressive jackpot pokies which means you need to spend real cash or real AUD to play this pokies game at online casinos.