Girls With Guns is Jungle Heat free pokies game which has three rows and five reels powered by Microgaming. The girls’ squad got the assignment to find and capture drug king Hector Morales in the jungles of Latin America. So Katherine, Maria, Kira, Alex, Zoe and Jess pack their stuff and travel to the jungles in search for the infamous villain. The game has spectacular appearance. All the symbols are greatly drawn and animated. The Wild reels will introduce all the girls’ squad one by one. During the game plays the greatly composed action music.

About Girls with Guns Pokies 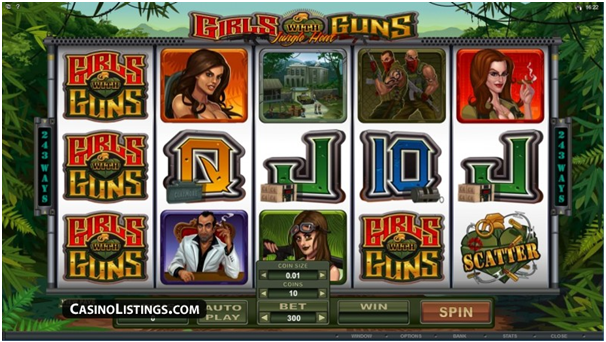 The Girls with Guns pokie is a 5 reel pokie that offers players 243 different combinations to win every time they spin the reels. The girls are dressed in military uniforms which makes them even sexier as they handle the big guns. Coin values vary from 0.01 up to 0.05, with up to 20 coins allowable per spin. The lowest amount a player can place on a wager is 0.30, while the most they can part with is 30. The bumper jackpot, meanwhile, is 1,900,000 coins. 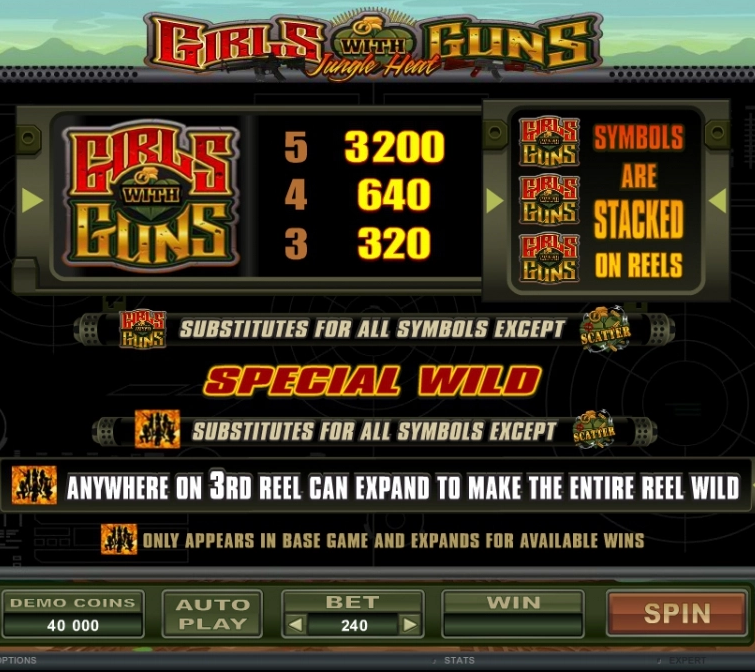 The game offers many great features including wild symbols that can expand to cover the entire third reel, scatter symbols, free spins and multipliers.

Girls With Guns Rewards and Wins 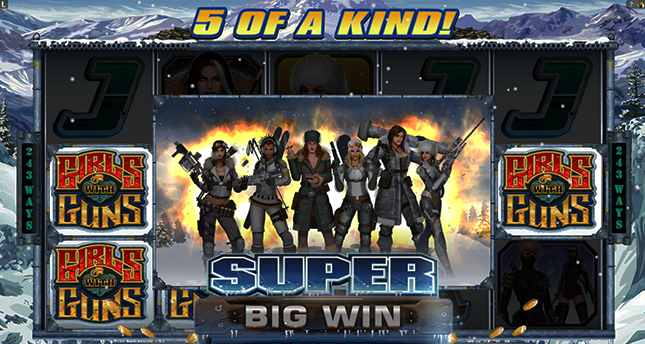 Simply land two or more symbols in a pay-line to make a win. When you hit a winning combination, you can expect more than a jaunty sound effect: a girl with a gun bursts out of her reel and starts joyously unloading rounds. The effect is particularly dramatic when you score a big win: one of the gun-toting females shoots up a compound, blowing it to smithereens as the wild symbols flash.

The Girls with Guns logo is the second highest-paying in the game, yielding a massive 4,000 credits for 5 in a line, or 800 for 4 in a line. It’s also the game’s stacked wild, replacing all symbols except the grenade scatter. What’s more, if the wild appears on the third reel it can expand to make the entire reel wild. This fortuitous turn of events can only occur in the base game, though.

The scatter symbol in Girls with Guns is the grenade. Three or more entitles you to 15 free spins. In each free spin, a random reel is turned wild. The free spins can also be re-triggered, and scatter wins are multiplied by the total bet staked.

As well as unlocking the door to freebies, the scatter is the game’s highest-paying icon. A gargantuan 30,000 prize awaits if you can land five of these beauties in a row.