How To Play Caribbean Stud Poker At Online Casinos? 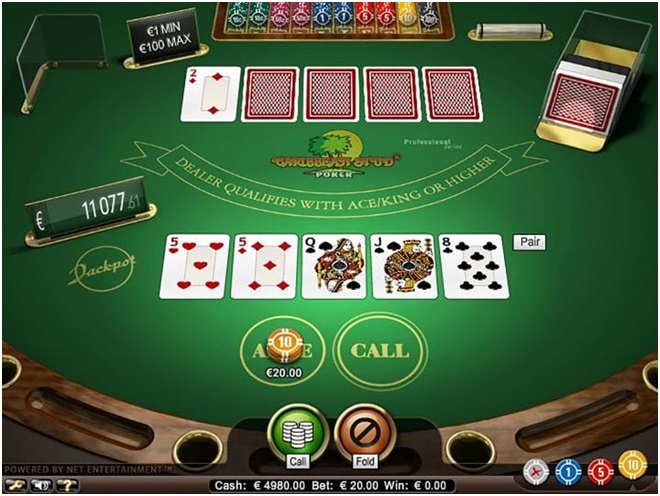 Caribbean Stud Poker is a popular card game played at real land casinos, online casinos, live casinos and at mobile casinos.  Australians love playing this game and many Australian players had won big amount by winning Progressive Jackpot playing Caribbean Stud Poker. Caribbean Stud Poker is thus a pretty cool game of poker and is established on the base of traditional “stud” poker in which only one hand consisting of five cards is dealt to players who do not play against each other but against the house. The player’s objective is to make a five-card poker hand that is higher than the one of the dealer. Players are also allowed to make a side bet in order to compete for a progressive jackpot. In case that they are dealt a Royal Flush hand, which is the highest hand in the Caribbean Stud Poker game, they are granted the entire amount of the progressive jackpot.

What we advise before you begin to play:

To begin a hand of Caribbean Stud Poker, you’ll need to place a mandatory ante bet, say for example $5. Once you’ve anted up, click deal to begin the hand.

The dealer will distribute five cards face up in your direction, before dealing themselves five cards as well. The dealer’s hand will have four cards face down at the beginning, with one card exposed to provide players with the partial information on which the game hinges.

The objective of Caribbean Stud Poker is simply to beat the dealer’s five card hand with your own, according to the standard poker hand hierarchy. That means one pair beats high card, two pair beats one pair, and so on.

With no ability to improve your five card holding, Caribbean Stud Poker might seem a bit boring by that description, but the game actually hinges on a single decision as to whether or not to raise the stakes or simply fold out.

By comparing your five card hand to the dealer’s lone exposed card, players can decide whether or not to up the stakes by raising, or to leave the ante bet as their only risk. In other words, after you’ve anted for $5, and assessed the strength of your five cards relative to the dealer’s up card, you can opt to raise and place an additional wager. The raise bet will always equal double the amount of your original ante bet, so with $5 already in the pot, raising will cost you $10 more.

You can also elect to fold, or forfeit your cards and the ante bet, along with any side bets in play.

After you’ve made the game’s only decision, raising or folding, the dealer will reveal their four down cards and complete their own five-card hand. Your hand is compared with the dealer’s hand, and the highest hand is declared the winner.

One thing to remember about the dealer’s hand, however, is that it must reach a certain level of strength to qualify for a win. In the case of Caribbean Stud Poker, the dealer must make a hand of ace-king high or better in order to qualify. To visualize dealer qualification, the worst qualifying hand a dealer can hold is A K 2 3 4, while the best non-qualifying hand stands at A Q J 10 9.

On the other hand, when the dealer does qualify and your five cards outrank theirs, the real fun of Caribbean Stud Poker begins. By beating a qualifying dealer hand, you’ll earn a payout of even money on your ante bet, along with an additional payout on your raise bet.

The best online casinos in Australia to play Caribbean Stud Poker are:

Caribbean Stud Poker at Online Casinos in Australia is powered by Betsoft, RTG, Evolution Gaming, Microgaming, NetEnt, Betsoft, Playtech and many other gaming providers. You can also click here to play this poker game now with your mobile be it iOS or Android.